Some things like out taste for games don’t change though – as we enter 2022 running, here’s a smattering of new stuff gracing out shelves, hopefully with a little something for everyone’s tastes. 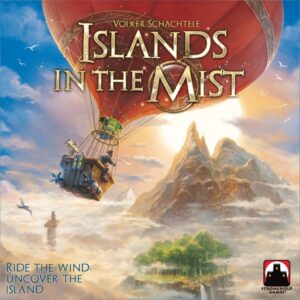 Travel in your hot air balloon and make use of the local winds skillfully to save the precious energy you need to speed up or slow down while exploring the rugged terrain below you. The wind can be both help and hindrance, sometimes taking you where you want to go, other times becoming something you must battle to make headway against to reach your destination.

In Islands in the Mist, players explore the terrain surrounding their balloon, placing tiles on neighboring hexes as they travel. On discovered terrain, cities can be built and monuments erected – shaping the scenery around them. The game ends once a player has connected all terrain to the balloon take-off site and the player who has made the most of their development tiles wins! 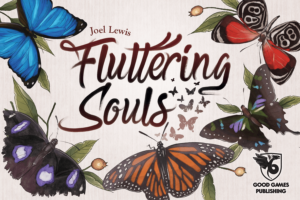 Fluttering Souls is a captivating, beautifully illustrated two-player game based on the Japanese legend of The White Butterfly. You will compete to collect a kaleidoscope of butterflies in the hope of being visited by The White Butterfly; the soul of a loved one.

Fluttering Souls is a 2 player game, made up of 3 – 5 rounds. In each round players take turns collecting butterflies to earn victory points, either in a set or by themselves. The player that collects the most victory points at the end of a round is awarded a White Butterfly Token. The first player to collect 3 White Butterfly Tokens is the winner.
2 Players, 20 mins, Ages 13+ 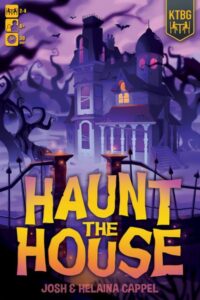 In Haunt the House, players are the ghostly residents of a haunted house competing to terrify Ghost Hunters and scare them out of their residence, leaving a trail of abandoned gear and self-respect.

Haunt the House is a hidden information and deduction based game where players attach Scare cards to various Ghost Hunters face up to trigger bonus effects from the room they are in, or face down to maintain an element of uncertainty to what effects are and are not in play. As each Ghost Hunter is vulnerable to specific combinations of frights, keeping information hidden from the other players can in turn bait out valuable resources from their hand.

Alternatively, players can call a BOO!, guessing that the scares placed on a specific Ghost Hunter are sufficient to frighten said character out of the house, leaving their valuable gear as trophies.

At the end of the game, the ghost who has collected the most valuable sets of gear wins the game!
2-5 Players, 30 mins, Ages 8+ 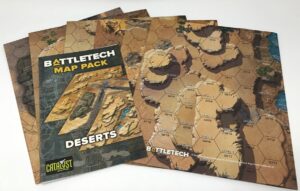 Created using the same aesthetics as the new BattleTech A Game of Armored Combat box sets and the Grasslands and Battle of Tukayyid mapsets, the BattleTech Deserts Map Pack include a variety of terrain elements that deliver interesting battlefields for players of every skill level. Each map is 17″ x 22″, paper, and may be placed side-on or edge-on with other maps for expanded battlefields.