FLASH SALE: FROM THE VAULT: THE GOD EMPEROR WILLS IT

FLASH SALE: FROM THE VAULT: THE GOD EMPEROR WILLS IT

Here’s an army deal going up on flash sale for an extra-special low price. If you like your Marines in a perpetual fit of zealotry inspired violence, Black Templars are probably going to be the army of choice for you, and if you’ve been contemplating the start of a crusade to burn the [ INSERT THING I DON’T LIKE HERE ] in the name of the God Emperor of Man, we might have something for the fastest shopper.

Representing more than 100% added value, this bundle comes with a spread of Black Templar staples to get your Crusade starter, including two characters, the bundle pack comes with the necessary Space Marine Codex and Black Templar Supplement to get you into the field and burning the Heretic, Mutant and Xenos as fast as possible. On top of that, this bundles comes with a Deathworld Forest kit to give you something to burn while waiting for your opponent to amass their troops and a spread of handy accessories to get you gaming fast.

Just don’t wait around. This is a one-and-done deal.
As soon as this bundle sells, it’s gone.

Eye on the prize. 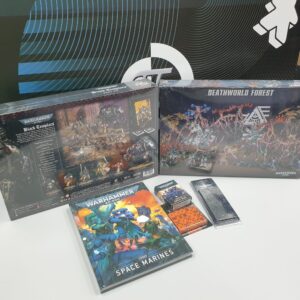