A restock wave of Clan Invasion Box Sets, Total Warfare Books and Elemental Points have hit out shelves, bringing with them yet another wave of the Clan’s advanced fighting machines to smash into the wavering Inner Sphere resistance. 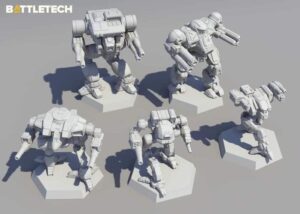 Clan warrior philosophy eschews BattleMech designs in favor of OmniMechs, which are seen as far more prestigious machines, often leaving these older designs and refits in the hands of Solahma and second-line forces. The Clan Heavy Star challenges this perception though – far too dangerous to ignore, this crushing wall of assault-weight metal is capable of ploughing straight through the stiffest of enemy resistance and bursting through on the other side leaving shattered foes in their wake. The Stone Rhino (Inner Sphere Reporting Name “Behemoth”), Marauder IIC, Warhammer IIC, Supernova and Hunchback IIC may not be subtle machines in the slightest, but the big guns never tire. 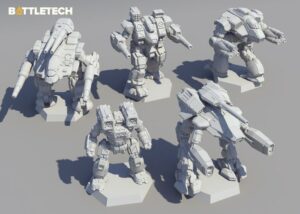 The Inner Sphere developed two schools of thought in dealing with the seemingly inexorable Clan advance. The Bandit Defence predicated upon stringing out Clan formations and striking them repeatedly from ambush positions and overwhelming isolated units. The Castle Defence, upon which the Inner Sphere Urban Lance is predicated, involved turning industrial and urban complexes into strong points and making the invaders pay for every inch of ground in brutal attritional street fighting. Sporting a crushing mix of heavy autocannons and advanced sensor suites, the Victor, Hunchback, Enforcer and Raven stand prepared to sell themselves dearly to slow any Clan push. 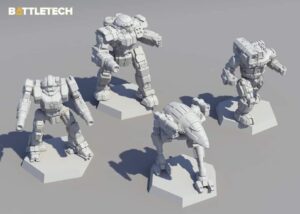 Unlike the dueling culture of the Clans, Inner Sphere combat doctrine often has complementing units operating in tandem. Fire Lances, for instance typically sport massed racks of long-ranged missiles and weaponry and arrive in the second wave of a push to break resistance by battering aside an engaged enemy with long-ranged fire support. This particular Inner Sphere Fire Lance, packs a brutal punch, with a trio of Assault ‘Mechs ready to wade straight into the stiffest fighting in an instant. While the Longbow and Trebuchet are specialist bombardment machines, the Zeus and Stalker are flexible machines, more than capable of seeing off the odd flanker with delusions of making an end-run on the formation. 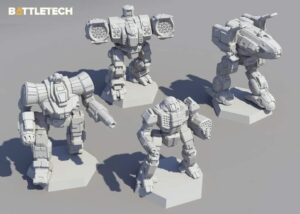 Quantities are limited, so if you want to get stuck in, now’s the time.

I’ll see you in the field, ‘MechWarrior.