Stuffing The Shelves In Time For April

Stuffing The Shelves In Time For April

It’s been a while hasn’t it. While the Games @ PI team has basically worked tirelessly to keep our staples in check, but the international situation has been… rough. We’ve been working to turn this around and hopefully this means that stuff is flowing again.

What this means for you, dear friends of the store, is hopefully a return to range and normalcy. And from the above, that’s clearly a HUGE heap of RANGE AND NORMALCY.

Are you looking for classic board games like Risk, Scrabble, Monopoly, Topple, Pay Day, Rummikub and Sequence? We’ve got them in-stock and ready for you.

Feeling horrible and edgy? Given the state of the world, who could blame you? Let loose your inner horrible person with Trial by Trolley and Codenames: Deep Undercover. Or maybe play a few rounds of Unstable Unicorns, Llamas Unleashed or Exploding Kittens. We won’t judge. Much.

Want your evergreen classics? Grab your Catan Anniversary Edition before it’s gone or load up on 7 Wonders, Citadels, Ticket to Ride, Splendor and Azul.

Alternatively, maybe you’ll want to engage in some global conquest with Scythe, stalk your opponent in Captain Sonar‘s team-based submarine duels or just ruminate on the sheer horror and misery of the Human condition in This War of Mine.

Interested? Swing by the store and check out the games. Hopefully the team will be able to set you up with a game or two to suit your tastes. 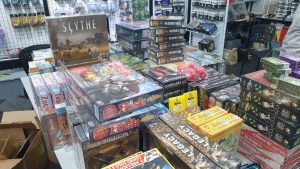 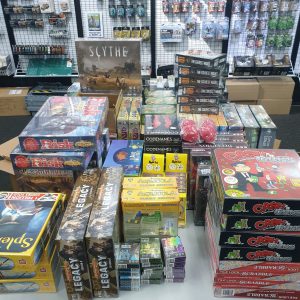 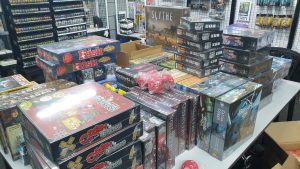