CAPTURE THE FLAG!
Will your dream team succeed? Helped by your Bard, your Kraken just captured the flag! You’re now waiting for your opponent’s attack ready to fight back with your Necromancer and your Rubber Duck! From outer space aliens to deep-sea creatures, improbable allies working toward a common goal: WIN THE WORLD’S GREATEST CAPTURE THE FLAG TOURNAMENT!

When Z-Man rocked up to Essen in 2022 with a slick trailer featuring Medieval Knights, Mobsters and Astronauts rocking up to a table with Rubber Ducks in a minimalistic deck-building autobattler tournament card game, we were intrigued by the oddball word salad premise to say the least.

Z-Man games Challengers! is a one-to-eight player light deckbuilding tournament game based around players tuning their basic cards and pair off in a series of incredibly fast duels. Designed from the ground up for one-on-one gameplay, a Challengers! game will feature 7 different head-to-head matches with players presented with the opportunity to tune their decks between each one. In the event of an odd number of players, Challengers! even comes prepared with a ‘Robot‘ player to round off matches.

Right off the bat, it’s worth mentioning that Challengers! is a swanky game and that huge box is absolutely loaded with some fairly amazing goodies. Right there in each box of Challengers! are four stitched neoprene duel mats and three blue plastic card holders with a built-in card holder for discarded cards. Considering that these upgrades aren’t actually necessary to play a game of Challengers! and are almost purely quality-of-life upgrades, it’s a nice gesture and it makes the game feel absolutely luxurious. 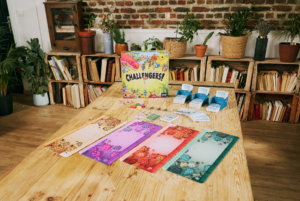 Gameplay in Challengers! is fundamentally simple. A game is played over seven rounds, with a final winner’s bracket – each r0und, players will be paired up with a new opponent, based on a fixture table. Before each round, the round indicator will allow players to draft cards for their deck, typically drawing five cards and keeping one or two, based upon whichever deck a player is drawing from. As players progress through tournament rounds, the decks they can draw from typically increases in power overall and as a result player decks can be tuned for combos and card synergies. After tuning a deck, possibly removing cards that are deemed underperforming, players duel their current opponent.

Each round typically resolves in less than five minutes and involves a tug-of-war of sorts. Each card in a deck typically has a specific card power printed in bold numerals. The player going first is determined by flipping the flag token and the first player flips the top card of their deck, taking possession of the flag token and marking that card as being in possession of the flag. In turn, their opponent flips cards from their deck until the sum value of those cards equals or exceeds the value of the card currently in possession of the flag, executing any card abilities along the way. When this happens, the last card player gains possession of the flag and their opponent clears their previously player cards into six bench slots, before flipping cards from their deck to retake possession. A round ends when a player needs to bench a seventh player and there are no free bench slots, or their deck is depleted, making card choice an actual serious decision.

The winner of each round grabs a trophy token, and the game moves on through seven brackets, with a final championship round between the highest scoring players. 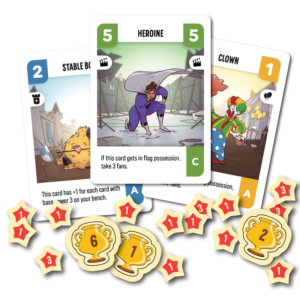 Right off the bat, it’s worth mentioning that Challengers! is cute.

Mechanically it feels like an autobattle challenge where the main tactical choice comes not in piloting the deck, though there are often little nuances to fuss over during the actual gameplay, but the main meat and potatoes of gameplay comes in the deckbuilding phase – deciding which cards to include is often what determines a win or loss each round. This alone is such an amusing twist of emphasis gameplaywise that it feels almost like a tiny collectible card game, where players are attempting to tune for synergistic abilities with the cards on hand. Certain cards increase card power once benched, but take up bench slots. Others flush cards from an opponent’s deck. Many have higher values when defending or attacking. A few are powerful but have long term detrimental effects. Wrangling these cards together and finding commonality between them creates a nice little variation in gameplay.

Between the overall component quality and the fast and furious gameplay, Challengers! is an excellent addition to a gaming table. As a party-based game for huge groups, the head-to-head aspect, while unexpected, functions great as an ice-breaker. Furthermore, the simplicity of gameplay make it great for families. Those looking for a serious strategy title might have to look elsewhere though given that the luck also plays a huge part in overall Challengers! gameplay and the simplicity that is its greatest strength may also be a turnoff for some.

Overall, I have to admit a fondness for the title. It’s simple, charming and unpretentiously silly and it was one of the whacky standout hits for Essen Spiel board game convention in 2022.