The Holiday period’s always a cram period for Retail, but we’ve finally had a breather to reload the store with a pile of goodies.
While the Christmas season might be over with the arrival of the New Year, we’ve got in a stack of new party friendly titles perfect for time with friends and family over the upcoming Lunar New Year gatherings with Level 20,  Soda Smugglers and Red Flags now gracing our shelves.

On top of that, RPG fans are also catered to with this restock and we’ve reloaded our WizKids Preprimed Miniatures range as well as shelf load of Pathfinder 2nd Edition RPG books. Wargamers can also mosey over to the BattleTech shelf for a restock of Clan Stars and Inner Sphere Lance boxes.

If you’re interested, keep going for more information on the store reloads!

“I need just a few XP to hit level 20. There better be some kobolds down there!” Here you are, minding your own business with some of your best friends, enjoying the leftover scraps buried in the filth of your cave, when you hear a human curse as they knock some rocks free and then you hear the most terrifying words you’ve ever heard. Words spoken of in legend. You thought they were just a myth to scare young kobolds into obedience.

In Level 20, players take on the role of kobolds in their den, scampering away from a 19th level fighter who needs only five XP to hit level 20. They will stop at nothing until they kill a few kobolds and hit that magical gateway that leads them to near divine levels of power.

On your turn, you play cards to help avoid the fighters, run away, and do everything you can to put obstacles (or other players!) between yourself and the humans. Your goal is to not be the kobold at the end of the fighter’s sword, with the game ending either with one surviving player or else with the fighters being forced to flee in shame!

Lawmakers are cracking down on ‘soda’, and tight regulation has made way for lucrative smuggling. One bottle per person is the new law — thus bribes, suitcase inspections, and arrests are on the agenda. Only one will emerge the ‘Soda Kingpin’.

Each round in Soda Smugglers, one player takes a turn in the role of a border guard while the other players act as travelers. In a quest to acquire coveted carbonation and its accompanying bottle caps, the border guard tries to confiscate as many sodas as possible while only the cleverest travelers will sneak across with their fizzy contraband. After each player has been the border guard (twice in a 3-4 player game, once in a 5-8 player game), the game ends and whoever has the most bottle caps wins!

Red Flags is a party game about convincing your friends to go on terrible dates.

In Red Flags, your goal is to use “Perk” cards to create the best date for “The Single” (the judge for this round). Every other player uses perk cards to make a hot date that they think would be a great match for that person. You’ll get characters like: a brain surgeon that loves to cuddle, an olympic gymnast that loves video games, and a famous musician that owns your favourite sports team But then everyone gets to play a Red Flag onto another player at the table.

Now all of these perfect dates will have flaws like: Punches every barista they see, wears a diaper because it’s “more convenient,” or collects human skulls, says they’re practically free! Now that all of the dates are horrible, everyone has an opportunity to argue why their date is the best one for “The Single,” who chooses which date wins… 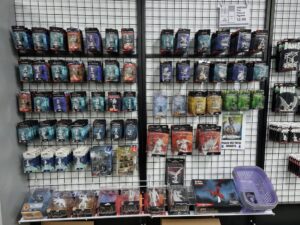