Party (Game) The Weekend Away?

Party (Game) The Weekend Away?

The weekend cometh, and perhaps it’s time to cut loose with a few friends. Now that groups are larger again, maybe it’s worth a look at some classic standbys and a few ‘horrible’ new options to tantalize your friends. Alternatively, your friends are sus. Unfortunately, in this situation, all we can be is sad for you.

At least you can play the Hello Neighbor: The Secret Neighbor party game, which sees you attempt to infiltrate a Neighbor’s house even as Neighbors lurk amongst you.

As implied it won’t help your friends become less sus and it won’t make things any better, but maybe they’ll decide you bring cool games and will kill you last.

Take the Trolley Problem to illogical conclusions and plough your tram through the guilty and innocent alike. We won’t judge. Frankly we find this fairly hilarious. We’re horrible people, we know.

But wait. What if you’re a horrible too?

How about some horrible expansions? This is a Cyanide and Happiness game after all. We’ve got R-Rated Track Expansions and R-Rated Modifier Decks for those of us who don’t think running people over is quite bad enough. 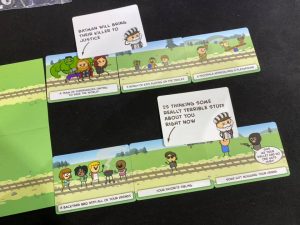 So, come on down, bring some friends and pick up a game or two to play with your friends. Or colleagues. Or relatives.

After all the weekend is here and you’re in all likelihood not going anywhere are you?