Hey PI-Fans, if you’re a Chaos Demon player and the idea of faffin’ around with a flock of Furies amuses you (I said Furies, not Furries. Space Wolf players will have to look elsewhere., you’ll want to take a look at this offer.  Clearly, someone thought the same thing, but probably got cold feet when they found the Furies came with Raptorix. Both units are fieldable in Age of Sigmar Slave to Darkness armies while Chaos Furies are available to Chaos Demon armies in Warhammer 40,000.

If you want a box of cheap fast 12-inch moving flying flappy boys in plastic for your Chaos Demons army which can be upgraded to 4+ Invulnerable (Tzeentch aligned) or 5++/5+++ (Nurgle aligned), look no further.

EXTRA 5% IF PAID FOR IN-STORE USING NETS, PAYNOW OR CASH

We’re going to be placing these items up for sale one at a time in both Games @ PI and on our webstore.
As they sell, we’ll replace them with a fresh item. If it doesn’t clear within a 3-day period, we’ll swap it out for a fresh item as well.

Items sold as is. First-come-first served. 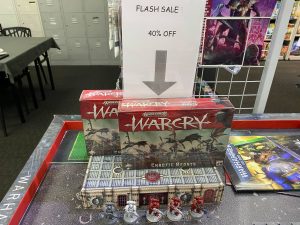