The manager oddly excited ever since he managed to secure a tiny quantity of Marauder: A BattleTech Anthology. Lost since the unceremonious end to the BattleCorps subscription service in 2016, the titular Black Marauder finally rides again in what is arguably one of the weirdest books to ever grace BattleTech publication since Far Country.

Why yes, hypothetical reader. It is… It is a book about a giant robot. A very special giant robot.

Marauder is a series of unsettling novellas told by unreliable narrators set in the BattleTech universe. One could almost describe them as horror. Except, again we don’t do that here.

You see, dear reader… In another science fiction universe, perhaps we’d see the arrival of silver armored warriors and an individual of inquisitive persuasion hunting a possible immaterial incursion… things like this are routine there, after all. But this is BattleTech. This is supposed to be hard sci-fi. We don’t do that here.

Is the Dark One a whispered tale of human cruelty retold and embellished in dockyards and bars? Is it the price of battlefield stress and hazing on the mind of a soldier? Or is it something stranger… and dare I say it… darker? 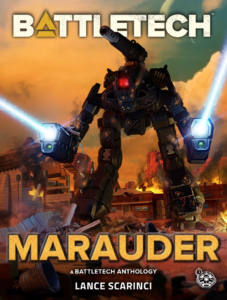 The tools of warfare are amongst the most fearsome ever crafted by man, capable of great destruction and great salvation… but not all tools are worth the cost.

During the chaos of the Word of Blake’s Jihad, the MechWarriors of the Federated Suns will go to any lengths to defend their nation from the Blakists’ unholy terror-including making deals with the devil. But that devil might just be a literal one: an all-black Marauder, hidden for several decades, that carries an aura of dread that infects everyone who encounters it. Many blame it for causing unexplained disappearances, technical failures, and even madness. But what is the so-called Dark One? Is it merely a ghost story told to scare pirates on the edge of the Periphery, or does something truly evil live beneath its cold, blackened armor?

This anthology collects the first three of Lance Scarinci’s stories about the Dark One, along with a brand-new fourth story exclusive to this volume.