If you’re a fan of Dixit, you owe it yo yourself to check out Stella – A Dixit Universe Game, now available at Games @ PI and via our webstore.

Stella is Dixit designer Jean-Louis Roubira’s revisiting of the classic Dixit formula, playing like a cross between Dixit and Codenames as players try to match wavelengths with each other in a brilliant twist on the traditional gameplay. Gone is the storyteller. Instead players try to match the classic Dixit artwork to theme words, secretly trying to ensure that their points of view line up with another player (and preferably only one) while attempting to balance that against the number of cards selected and trying not the be the person who chose the largest portfolio of picture cards.

Featuring the same stunning art-style of classic Dixit cards, Stella can be played on it’s own, but cards from Dixit and Dixit expansions can also be added to the deck should players desire increased diversity in their setup.

Stella even comes with a stack of blank theme word cards allow players to make their own additions to the deck, which is overall a nice touch.

If you’re looking for an abstract puzzle style party game or you’re just a fan of Dixit in general, Stella comes highly recommended. 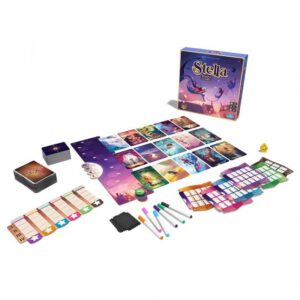