Stardew Valley and an Empire Alone

Stardew Valley and an Empire Alone

Strange how shipping works in this day and age. You plan out arrival schedules and this absolutely wonky combination of things just drops out of the ether together despite being staggered orders. After being lost in the warp and having basically gone around the world, our shipment of Empire Alone sourcebooks for BattleTech has finally been delivered after delays. Also somehow arriving together is another batch of ConcernedApe’s Stardew Valley board game, a cooperative board game set in the same setting of the bestselling indie farming life-sim. The first time we had it in, it basically just entirely disappeared, so we recommend grabbing your copy ASAP.

Otherwise, there’s plenty of restocks of classic titles like Sushi Go Party that people have been clamoring about.

Here’s to a great weekend, folks. From the new ilKhan on Terra comes word to the Wolf Empire of their Clan’s victory. With no further communication from Alaric Ward, Star Colonel Othar takes the reins of the Empire, attempting to weather the assaults of his neighbors, and ensure the ilKhan’s realm remains inviolate. Hungrily eyeing their worlds lost to the Empire, now stripped of the Wolves’ best, factions within the Free Worlds League launch offensives across the border and risk carrying Nikol Marik into a war she may not be ready for. At her back, the Spirit Cats and Clan Sea Fox lair in their Clan Protectorate, eager to pursue their own ends.

And out among the stars, the Wolf’s Dragoons and their new commander are on the hunt…

Empire Alone is a BattleTech sourcebook providing full details of the events around the Wolf Empire and Free Worlds League from 3151 to mid-3152. Included are a full historical summary of events in those regions of space, personality and unit profiles of key players—many appearing here for the first time, and game information to bring it all to your BattleTech tabletop. 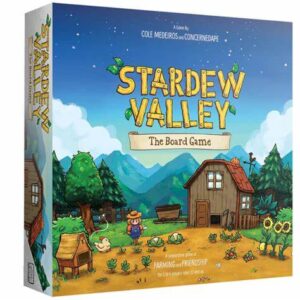 Work together with your fellow farmers to save the Valley from the nefarious Joja Corporation! To do this, you’ll need to farm, fish, friend and find all kinds of different resources to fulfill Grandpa’s Goals and restore the Community Center. Collect all kinds of items, raise animals, and explore the Mine. Gain powerful upgrades and skills, and as the seasons pass, do your best to protect the magic of Stardew Valley!