Want a board game fix? We’ve had to revise our hours to minimise staff on the floor in line with MOH’s instructions on Minimising Workplace Interactions, but we’re still keeping the gaming goodness going. Also worth mentioning is that our webstore also offers a free local delivery option for orders of S$50 or more.

CHECK OUT THE GAMES @ PI WEBSTORE

With rules on the reduction of overall group size, we figured it’s time to take a look at several excellent board games for your two-player needs. 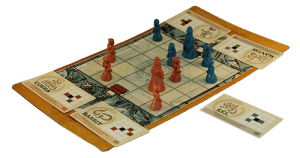 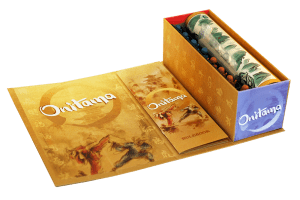 Onitama, by Arcane Wonders is a brilliant two-player duel. In this light abstract strategy game, players control a school of martial artists represented by a Master and four student pawns in a duel against a rival school. Two win, players must either move the pawn representing the Master of their school across the board into their opponent’s temple arch, or defeat their opponent’s Master with any one of their pawns.

Each player will have a pair of face up Move cards representing the board options available to their pawns. Each Move card moves the pawns according to their unique grid, defeating an opponent’s pawn if it moves into the same square. A fifth card face up on the side of the board will be exchanged with the previously used move, meaning that it whatever is done to an opponent will eventually be done back to you as well.

In this game of perfect information, planning ahead and out-thinking your opponent is the only path to victory. 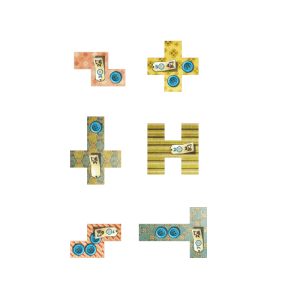 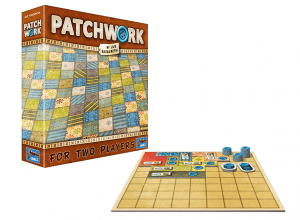 Patchwork, by Lookout Games is a tile laying area management board game. In the game, you and your opponent are tailors assembling your own quilt on a 9×9 grid while attempting to amass the biggest supply of buttons, which are both the currency and points use in the game.

Each turn, a player will purchase one of three patches by paying the button cost for each patch. After paying the cost, players will add the patch piece to the board, then advance their time token on a track based on the cost of the piece. The player who’s time token is behind their opponent then takes their turn. In addition to costs in buttons and time, some patches will also feature buttons which earn the player extra buttons at regular intervals on the time track.

When both players have exhausted their time tracks, players count score, earning one point per button in addition to any other collected bonuses, then lose two points for each empty square on their grid. Choose your patches carefully and keep a healthy supply of buttons to not only finish your quilt, but to make it better and more beautiful than your opponent‘s. 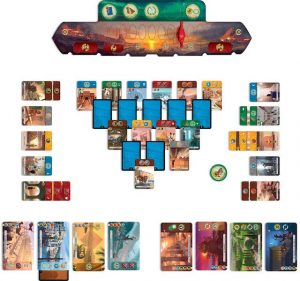 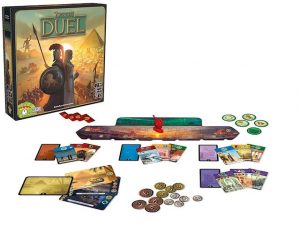 7 Wonders Duel by Repos is an amazing two-player reimplementation of the award winning 7 Wonders board game. Played over three rounds, each representing an age of growth, players control and expand their civilizations by acquiring cards that provide resources or advance their military or scientific development in order to complete wonders and develop their civilizations.

Players draft their cards from tableau of face up and face down cards prearranged at the start of a round, and a player may only take a card from the stack as long as it is not covered by others. Each card can be ‘built’ as part of their civilization board, used to construct a wonder or discarded for coins to aid future construction. 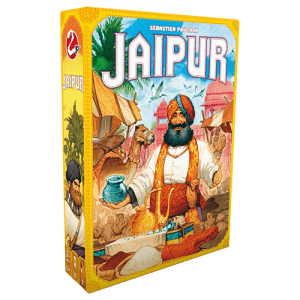 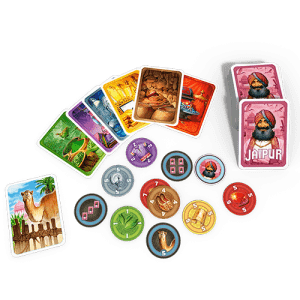 Jaipur by Space Cowboys places players in the roll of the most powerful traders in the city of Jaipur, competing for the privilege of being invited to the Majaraja’s court. Jaipur is a game of buying a trading, with players attempting to corner the market on various goods.

Each turn, players can either acquire goods cards from the market in an attempt to acquire a set of tradable goods, or sell those goods cards off for goods tokens which earn them rupees. Players need to balance the risk of decreasing returns for goods as more of those are sold to the market with the benefits of collecting bonus rupees for waiting so they can sell goods in large batches.

Players will also have to manage their herds of camels, and although they can’t be sold for points they are worth rupees to whoever has the larger herd at the end of the round.

Blending strategy and luck, Jaipur is a fast-paced card game that is easy to learn while offering plenty of depth to dedicated players. May the wealthiest player win!

GET YOUR COPY AT GAMES @ PI